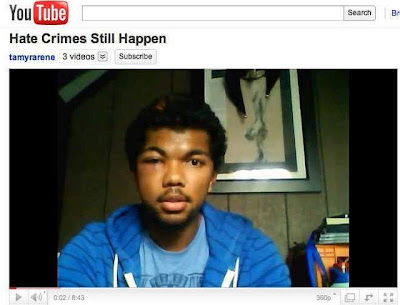 I think most of you have seen the YouTube clip of Justin telling his horrible story on being attacked in a gas station. Now the Feds are involved in this case.

Alesna said he has been told FBI agents have possession of surveillance video from the gas station. Sandra Berchtold, a spokeswoman for the FBI Detroit office, confirmed Wednesday that the agency, which handles hate crimes, is investigating.

Alesna said Detroit police asked him to make an identification during a lineup Tuesday night, but he was unable to do so. He said he was told later one of the men may have been a witness to the assault.

I'm glad to hear that Justin is getting the help that he needs. If everyone knows anything, please let the authorities know.

Email ThisBlogThis!Share to TwitterShare to FacebookShare to Pinterest
Labels: attacked for being gay, Hate crime