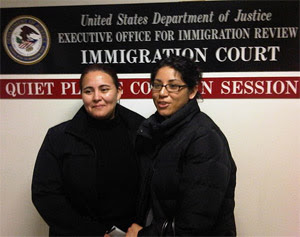 The Bi-National Same Sex immigration cases has been the talk for the past few days. While things seemed by on the good side, new information over the hold has sparked more questions... To be honest, I'm confused, but maybe this could explain some things.


An announcement by immigration officials in Washington on Monday that they were delaying decisions on some immigration cases involving gay couples led to a surge of expectations among gay advocates that the Obama administration had taken a small but significant step toward recognizing same-sex marriage.


But on Tuesday, immigration officials moved swiftly to clarify their position and dampen those hopes, saying they have not made any policy changes that would provide an opening to gay couples. The episode added to the legal confusion that has followed the administration’s determination last month that the law that bars the federal government from recognizing gay marriages, the Defense of Marriage Act, is unconstitutional.


In this case, the misunderstandings and soaring hopes arose from an effort in recent days by officials at Citizenship and Immigration Services, the federal agency that awards immigration status, to clarify their policy on granting permanent residency green cards to immigrants legally married to American citizens who are gay. While it is routine for American citizens in heterosexual couples to obtain green cards for their foreign spouses, the Defense of Marriage Act has barred such status for immigrants in same-sex marriages.


That situation has long been a focus of criticism by gay rights groups, who argue that the law is particularly discriminatory against immigrants. “If you are in a bi-national couple that is heterosexual, you get to stay here and work here,” said Richard Socarides, a lawyer who is president of Equality Matters, a gay rights advocacy group. “If you are gay, you get deported.”

Please go here for more info.
Posted by Wonder Man at 6:17 AM