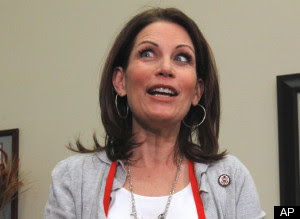 This has to be a joke! The Queen of Fools is seriously thinking about being President so much that she's getting a exploratory committee together.


CNN has exclusively learned that Rep. Michele Bachmann will form a presidential exploratory committee. The Minnesota Republican plans to file papers for the committee in early June, with an announcement likely around that same time.


But a source close to the congresswoman said that Bachmann could form the exploratory committee even earlier than June so that she could participate in early Republican presidential debates.


"She's been telling everyone early summer," the source told CNN regarding Bachmann's planned June filing and announcement. But the source said that nothing is static.


"If you [debate sponsors] come to us and say, 'To be in our debates, you have to have an exploratory committee,' then we'll say, 'Okay, fine...I'll go file the forms.'"

Girl, stop while you are ahead!

Would love to see her and Sarah Palin on the same ticket!

She bangin the Koch brothers and they are keeping her afloat. How this woman get away with calling the white house a bunch of gansters? She is a leader and not a good one.I am sure there are many a nuts listening this crazy woman. Thank god for karma. Because she is about to get a wakeup.