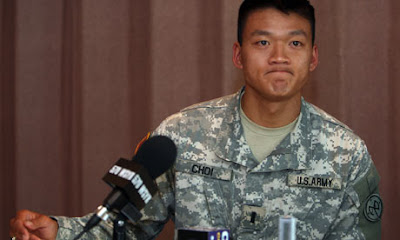 So here is my madness.

What he did was brave and heroic, but the reasoning was kind of lost on me. He wanted to take the DADT drama to the White House and he did, by chaining himself to the gates. And while that sent a message, it also sent him to jail. Now, he has a trial date and could possibly lose his job. And that's the interesting piece, all this fighting to keep his job and he can lose over something that's not related to DADT. It's almost ironic.

But many folks are calling him the new leader of the LGBT movement. To be real, I disagree with the 'new leader' bit. I feel that a leader is brave, but very wise and a good strategist. There could've been a more effective way to push the message through; something that may not jeopardize his job.

However, I do see Dan's actions creating a gateway to truly discuss DADT. He may have inspired others to fight for their rights in and out of the military. But that remains to be seen. I just not sure if it was the right way or time to send a message to the White House. Within a day of his arrest, Health Care reform took over, followed by the teabagger's mess and Stupak's turnaround. I felt like Dan's message got lost and somewhat forgotten in the media.

So, now I wonder... Was his arrest worth it?

Those are just my thoughts. I'm clearly trying to make sense of this. Please enlighten me if I'm totally missing the point. Would love to hear your views.
Posted by Wonder Man at 11:42 AM

I'm waiting to hear about this too. Why did he need to get arrested? Although, it did get publicity for the cause of DADT. And maybe he already knows he's not pursuing a traditional future (like a corporate american) so the arrest on a background check won't hurt his future. So, under that caveat, as long as he doesn't ask others to get arrested... maybe it's ok.

I think he, and many others, are dsgusted with playing nice all the time and asking politely for equality.
It's time to demand equality. We've been asking, in one form or another, since Stonewall; that's forty years of pleasantires and yet we're still denied basic rights.
We can still be fired, still lose our homes, still be beaten or worse, simply for being gay and it's really not a big deal to many.
It's time to make it a big deal.

A hero, yes, the new leader, now that is crazy.

I too am sick of playing nice with the politicians.

What Choi did was appropriate.

promises, promises and more promises. It's time for more civil disobedience. A salute you Lt. Dan Choi! We need many many more like you and the other soldier that was with you.