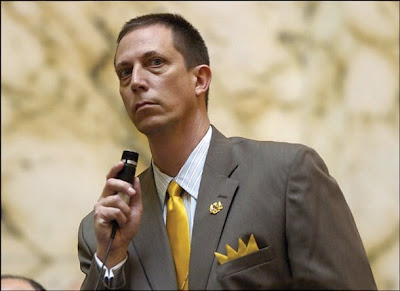 Republican member of the House of Delegates, Don H. Dwyer Jr is being a silly bint.

He wants to impeach Maryland's state’s attorney general, Douglas F. Gansler, because he gave his legal opinion about recognizing gay marriages from other places and providing gay married couples benefits from state agencies.

Don said that the AG overstepped his authority in issuing a legal opinion. Really? So he should be impeach?

Get the frak out of here, Don, you should be impeached for being stupid and ridic.

Honey he should be impeached for wearing that tie and matching pocket square combo!