Lord, Crazy Queen Orly Taitz is running for Secretary of State of California 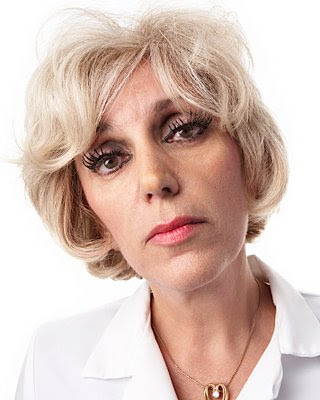 Is she for realz?

This she-mess wants to be in politics?


Vote for Orly Taitz for Secretary of State of California in June 8 Repub. Primary

Dr. Orly Taitz, ESQ is well known around the country as a Constitutional attorney who pursued the cases of massive elections fraud during 2008 Presidential elections, illegitimacy of upcoming Health Bill, and is representing over 200 high ranked members of the military, State Representatives from all over the country and former candidates on the ballot, including Dr. Alan Keyes, former Ambassador to the UN. In 2010 Republican primary Dr. Taitz is facing a former football player Damon Dunn, who has zero background in elections law or elections, as he never even voted until 2009. Mr. Dunn was a reg! istered Democrat in Florida since 1999 until he registered as a Republican in CA less then a year ago and only 6 months before his official announcement to runs as a Republican for the position of the Secretary of State. That is in violation of CA statute §8001(a)(2), which requires one not to be affiliated with another party for at least 12 months before the announcement of his candidacy. Additionally, Mr. Dunn has violated CEC statutes §18203 and §18500, and committed voter fraud by not disclosing on his voter registration card in CA the fact that he was a registered Democrat in FL.

Dr. Taitz has two doctor’s degrees. She is a doctor of Jurisprudence and a Doctor of Dental Surgery. Dr. Taitz is the President of Defend Our Freedoms Foundation and Editor of the OrlyTaitzEsq.com blog, where she writes prolifically on the issues of Constitutional law, politics, economy, constitutional education of our youth. Dr. Taitz is married to her husband of 23 years and a mother to 3 sons, ages 20, 18 and 16. Her oldest son is graduating from an Ivy league university pre-med program next year, her younger sons are in the last years of High School.

Dr. Taitz! was born and raised in the Communist Soviet Union and knows first hand the bleakness of the totalitarian regime and depravation of the Constitutional rights. As Mr. Obama became US president, Dr. Taitz got deeply concerns by the fact that he refused to present any of his original vital records and by the fact that the issue of Mr. Obama’s dual citizenship and split allegiance was not heard in any court of law yet. Dr. Taitz has embarked on a pro bono mission to bring this issue to light and have it heard on the merits.