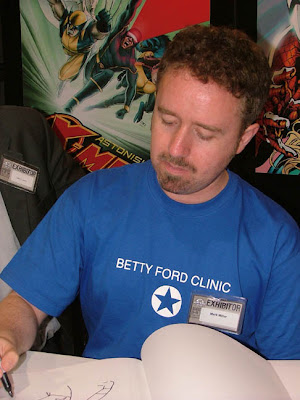 But he has a great reason:

I'm having so much fun creating my own characters and enjoying the control this gives you over the comic-books and the movies that handling an established franchise eems odd to me now. It's tempting, SO tempting for a guy who's been a fanboy as long as he can remember, but I need to stick to my guns.

I want to create the NEXT generation of superheroes over the next few years and going back would, I think, be a mistake.

Vaughn is being offered everything you can imagine too in the wake of Kick-Ass, but we both agreed that keeping complete control is what made Kick-Ass such an amazing experience for both of us. Six big producers have now come forward for Nemesis (I've always said I'm holding off until April 17th before I let CAA take this out) and Vaughn and I already have our next movie planned out, based on a book I'm doing with Leinil Francis Yu in September.

But it's still the friggin' X-Men, guys. Have I gone mad? Was it nuts to turn this down?

No, it was a wise choice. We love your work and look forward for your next creations.
Your fans salute you, Mark.

source
Posted by Wonder Man at 3:21 AM

With the strides he,Frank Miller, and Geoff are making.. maybe in the future they will ask writer of great comic book characters FIRST, before they go to all these hollywood writers.