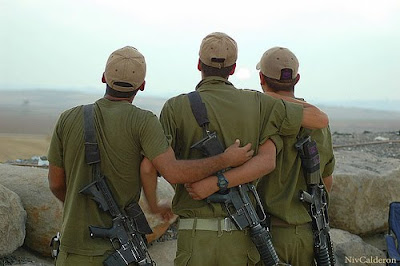 The target of our efforts needs to be Congress and the senior leaders of the military who will use the stunt by Choi and friends to say 'See, the homos can't behave appropriately in uniform.' I appreciate the call for civil disobedience, but I also appreciate that there are many people who wear the same uniform but do not support the same ideals. Regardless of what service's uniform we wear, when we put it on, we should become (relatively speaking) colorless, genderless, and overall neutral. We should be judged not on the biological identifiers of gender, race, or sexual identity, but on the job that we do in defense of our nation. There aren't many people in this nation who haven't heard Dan Choi's story. Him wearing his uniform to carry out this publicity stunt probably degraded our cause in the minds of many people whose attitudes we still need to change.

This is from one soldier to another.
Posted by Wonder Man at 6:30 AM

The "job we do in the defense of our nation" is done in uniform, as should any civil disobedience we do in defense of our personal liberty. This guy really needs to stop thinking of other's "attitudes." His logic is as credible as those assholes who say that a man in a feather boa can't fight for gay rights because it'll "degrade our cause in the minds of many people whose attitudes we still need to change."

You don't put on a uniform and become faceless, you put the uniform on and give IT a face.

I'm not really sure how his efforts degrade our cause. He took a personal risk for something he believes in, a risk that has serious consequences, which he will have to answer for. It might undermine some of the credibility he had gained, especially in the face of detractors, but we shouldn't be catering to their whims anyway; their minds are already made up, and not in our favor. Our cause remains unchanged by his personal act. Seeking equality for all in the armed forces will continue, whether people like it or not.