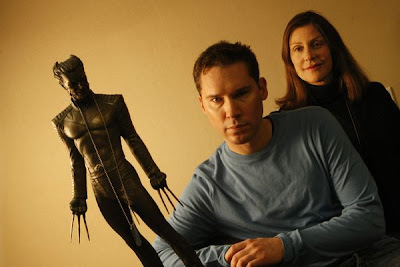 Bryan Singer talks with Los Angeles Times about his vision for the next X-Film.

Singer says the film will find its axis in the relationship between Professor X and Magneto and the point where their friendship soured. It will also detail the beginning of the school for mutants and have younger incarnations of some characters with new actors in roles of Cyclops, Jean Grey, the Beast, etc. (He only shrugged when asked if Hugh Jackman might appear as Wolverine, the one character who doesn't age at the same rate as humans.)

The premise has compelling elements to it, Singer said. "Just doing younger mutants is not enough. The story needs to be more than that. I love the relationship between Magneto and Xavier, these two men who have diametrically opposite points of view but still manage to be friends -- to a point. They are the ultimate frenemies."

I don't Wolverine near this movie, please! Just focus of the 1st five.
Posted by Wonder Man at 3:18 AM

I would love it if they would forget about the other X-Men movies and reboot this franchise. Add it into the Iron Man, Hulk, Avengers, Thor, Capt. America set of stuff. Let's just make all the newer Marvel movies one cohesive universe. The same for the Spider-Man reboot too. The Ultimate stories lay a great foundation for this to happen and make sense.