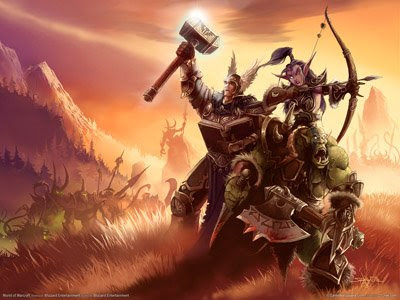 Check out this press release

LOS ANGELES, Calif. – July 22, 2009 -- Blizzard Entertainment, Inc. and Legendary Pictures announced today that Sam Raimi has signed on to direct the eagerly-anticipated major motion picture based on Blizzard Entertainment’s award-winning Warcraft® universe. Raimi has, in the course of his career, clearly demonstrated a genius for developing and adapting existing fictional universes for mainstream audiences while staying true to the spirit of the original content.

Raimi directed the Spider-Man trilogy, which has broken box-office records around the world and garnered five Academy Award® nominations. Known for his imaginative filmmaking style, richly drawn characters and offbeat humor, Raimi wrote and directed the cult classic, The Evil Dead and produced 30 Days Of Night.

He most recently wrote and directed the supernatural thriller, Drag Me To Hell. "At its core, Warcraft is a fantastic, action-packed story," said Raimi. "I am thrilled to work with such a dynamite production team to bring this project to the big screen." Charles Roven’s producing talents were recently seen with last summer’s blockbuster The Dark Knight, which grossed in excess of $1 billion, was nominated for eight Academy Awards® and won two. His body of work also includes the widely acclaimed Batman Begins and the sci-fi classic 12 Monkeys.

Raimi’s partner, Robert Tapert, will be an Executive Producer and Blizzard Entertainment’s Senior Vice President of Creative Development, Chris Metzen, a Co-Producer. "Partnering with Sam Raimi exemplifies Legendary's mandate of marrying the highest quality intellectual property to world-class filmmakers" said Legendary’s Tull. "Sam's passion for 'Warcraft' is undeniable and we know that he will create an incredible film worthy of Blizzard's phenomenal franchise. We look forward to collaborating with our partners at Warner Bros. and continuing our successful relationship with Chuck in bringing this rich new world to the screen."

I've seen folks play this game, but is it movie material?
Posted by Wonder Man at 4:46 PM

It so totally is movie material, What's not epic about fighting the evils of the world? Seriously the game has so very many stories that would make great cinema, it would be difficult to choose just one or two to feature in a movie. The lore of our imaginary world is very rich and really is still being written in many ways. It's something with so much global presence that it has it's very own 12 step groups all over. So yeah, in my opinion it is very much movie material.