Washington Judge Protects the Names of the Haters... For Now 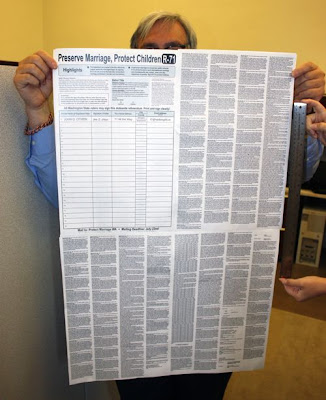 In the continuing battle of gay marriages and rights, the Haters in Washington somehow gathered enough signatures (Referendum 71) to repeal the state's new domestic partners law.

So with that in mind, LGBT supporters said alright, but we will make the names public so we all can see the foolishness, but U.S. District Judge Benjamin H. Settle granted a temporary restraining order to hold the releasing the Haters' names.

Judge Settle cited that absence in his written order, and also gave what appears to be a nod to the strength of the referendum backers' case, writing that they "have sufficiently demonstrated a reasonable likelihood of success on the merits" of their First Amendment claim, and "a reasonable likelihood of irreparable harm if the names are released."

Larry Stickney, campaign manager with Protect Marriage Washington, called the judge's decision a good outcome. He and the group's attorney, Stephen Pidgeon, high-fived one another in the courtroom as they read the written order.

A consortium of religious conservative organizations, Protect Marriage Washington on Saturday submitted 138,500 signatures to the secretary of state seeking to force Referendum 71 onto the November ballot.

At least 120,577 of the signatures must be valid for the referendum to qualify.

Tom Lang, director of knowthyneighbor.org, which plans to post the names on that Web site, said he was intensely disappointed Washington failed to defend its own public disclosure law in court.

I am disappointed too, Tom. Hopefully, you will release those names and put those fools on blast. However, we may not have to worry, the signatures maybe be invalid anyways.

fingers crossed
Posted by Wonder Man at 7:44 AM

Washington state, not that *other* Washingon (DC). (It is hard being so closely associated, nomenclature wise, with those folks at times.) I knew they were trying to get the publication of the names stopped but not that they had succeeded. Found this story.
http://seattletimes.nwsource.com/html/localnews/2009565071_ref71names30m.html

sorry about that, since both places are going through similar mess, I got confused

The names should be posted anyway, even if they're mostly invalid.