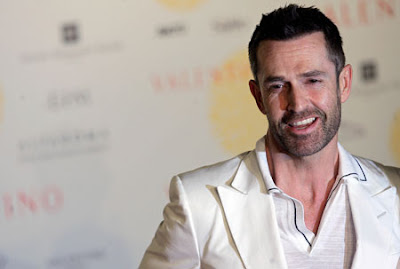 "He looked like a character from Shrek. He was a black to white minstrel. He was crucified by that court case when he was accused of child molestation - that killed him.

"He personified the pain and anxiety of a black man in a slave country. We all watched as he changed from black to white. He was living performance art.

"I think it was fortuitous that he died. He was supposed to be doing 50 concerts in London.

His view of Michael Jackson's death...such a bitter queen.
Posted by Wonder Man at 12:55 AM

I'm surprised at his harsh/critical comments. They seem a bit over the top.

Hey, getting that much plastic surgery messes you up.

Michael had vitiligo.
The changes on his face had more to do with low self esteem and self hatred than wanting to be white.

Rupert is very bitter and bitchy lately. I guess because his own acting career never took off.

Well, he do look quite handsome in that picture I must say...

I must say that would have to agree. He MOLESTED children and everyone still idolized him. If he would have molested your children you would have said the same things Rupert said.
GO EVERETT!!