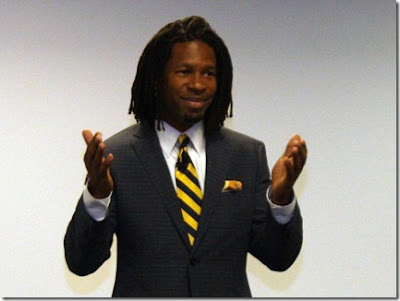 Not to be flip, but Miley Cyrus is older than Bill Clinton's "don't ask, don't tell." That doesn't mean that the safety of gay people should be trivialized or that Obama should not be held accountable for the promises he made on the campaign trail. But to call this month's first-ever White House reception for GLBT leaders "too little too late" is akin to a petulant child throwing a tantrum because he wants to eat his dessert before dinner. This is one of the main reasons why so many blacks bristle at the comparison of the two movements -- everybody wants to sing the blues, nobody wants to live them.

This lack of perspective is only going to alienate a black community that is still very proud of Obama and is hypersensitive about any criticism of him, especially given he's been in office barely six months.

If blacks are less accepting of gays than other racial groups -- and that is certainly debatable -- then the parade of gay people calling Obama a "disappointment" on television is counterproductive in gaining acceptance, to say the least. And the fact that the loudest critics are mostly white doesn't help matters either.

Excellent point. I agree with what he said.

So, non-black gay people need to shut up for fear of alienating the black community because they are "still very proud of Obama"?

I wanted to agree with him until he started focusing on race.

Amen! And he spoke about race because the gays have made it about race. It is so funny how race can be thrown around by non-black gays, usually in the negative, but the moment blacks use it to make their point it is a problem. The bottom line, you have to crawl before you walk, so ALL gays need to be patient and be supportive. If you want to use the civil rights movement to support the struggle, then understand, that movement took time, patience, unity and understanding and more than 6 months.

Also, since when are non-black gays throwing race around?

6 months? Homosexuals have been persecuted for centuries even before Nazi Germany, our HUMAN rights movement didn't START when President Obama took office.

There are issues with race in every community, but Granderson's comments make the case for black people to support Obama JUST because he's black and for non-black gays stop criticizing him because they're just racist. I know those aren't his words, but the sentiment is there and they trivialize lives on both sides of the argument.

Time? NO. People are dying.
Patience? NO. President Obama is doing things, but he could always do more.
Unity? Don't preach unity when you bring up divisive racial issues in an argument.
Understanding? Couldn't agree with you more.

EmikeGarcia, just because you might not agree with my position on this topic doesn't call for you to label it as foolish. But what I do find foolish and sad is that you and many others probably really believe that blacks support Obama just because he is black because Granderson did not make that statement or sentiment. Unlike yourself, I was not arguing or preaching to you, because when it comes to race, everyone seems to be the authority on what everyone is thinking and feeling instead of pulling together and understanding as one, quite like yourself. Although you are only one person your angry and dismissive attitude seems to be the norm with alot of gays these days. My struggle and your struggle is obviously very different.

So, being told to shutup is OK? Being told to sit down is OK? Just tossing people into whatever box you feel they should be in so you don't have to consider their arguments is fine, as long as you don't call it foolish?

I stand by what I said, but I agree with you when you say everyone seems to be the authority on what everyone is thinking, and you're repeating what I meant in the first place, though you choose to dismiss MY point and instead point the finger at everyone else when it comes to a race issue.

By the way, saying "And the fact that the loudest critics are mostly white" puts race at the forefront, not what I, or others believe.