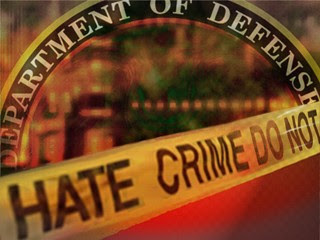 So the 3 amendments passed yesterday. These amendments will limit the extension of the federal hate-crimes law.


After the voice-vote, HRC released a statement, here's some of it

The Human Rights Campaign, the nation’s largest lesbian, gay, bisexual and transgender (LGBT) civil rights organization, responded today to votes relating to the hate crimes provisions in the Defense Department authorization bill. The Senate passed four amendments to the Matthew Shepard Hate Crimes Prevention Act: three offered by Senator Sessions (R-AL) and one offered by Senator Kennedy (D-MA). The Matthew Shepard Act was added this past Thursday, July 16, to S. 1390, the Senate version of the Department of Defense Authorization bill.

The Senate adopted three amendments by voice vote. One amendment, SA 1615, adds the death penalty to the provisions of the Matthew Shepard Act. HRC strongly opposed this unwelcome amendment and hopes to address it as the Act continues through the legislative process. The Amendment was offered by and supported by Senators who oppose the Matthew Shepard Act in an effort to derail the Act. Fortunately, a side-by-side- amendment offered by Senator Kennedy was also added to the bill. The Kennedy amendment provides for additional restrictions in the use of the death penalty under the Act.

The third amendment requires the Attorney General to promulgate guidelines with “neutral and objective criteria for determining whether a crime was motivated by the status of the victim.”

A final Sessions amendment, SA 1616, was adopted by a vote of 92 to 0. This amendment creates a new federal criminal offense for cases involving assaults or battery of a U.S. service member – or a member of the service member’s immediate family.

These amendments can be removed in the final, final vote. However, it can still be vetoed by the Obama.