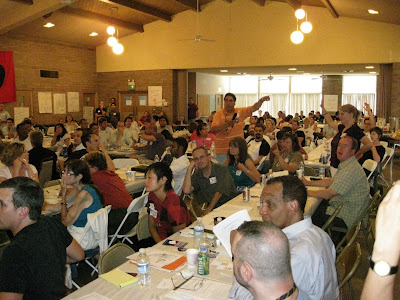 While I was chillin' at Comic-Con, hopes for marriage equality in Cali was on it's last lifeline.

According to the blog, Unite the Fight, this Sunday's Marriage Equality Leadership Summit only reinforced the foolishness and drama within our own house.

Here's some highlights:
I am deeply sadden by this foolishness. What has happen? Why is our leadership this piss-poor?
How dare we demand Obama to do his job, when we can't do ours. This is very telling of the lack of a strong LGBT community and commitment to change.

I asked months ago if we were ready for a real civil rights movement and I believe we are nowhere near ready.

I guess I need to put on my bracelets and tiara to get this stuff poppin'. It's going to take folks who are not about the fame and glory. It's going to be the real people who will get us there. I just hope they step up soon.
Posted by Wonder Man at 11:49 AM

Well it sounds like, they need someone to take charge and run with it. Its sad isn't, to think of all the people there that are gay, but yet doesn't stand up for what they believe.