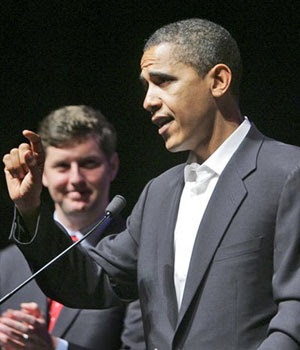 I think that this is a really tough issue and there have been a lot of calls for the President to do this. I know I mentioned it before, but the President -- to his credit -- seems not to want to ignore standing law that was passed by the Congress.

We had a saying at West Point "Take the harder right over the easier wrong." The President doesn't want to clearly contradict US law, even though I feel that this law is fundamentally wrong and discriminatory. It shows why Congress needs to change it. We've gotten 16 congressmen and women in the first week to come on board, but we're not stopping until we get the job done. In fact, we just got an additional cosponsor today -- so we're up to 162.

RI's marriage equality bill got 31 co-sponsors this year. Considering there are only 75 members in the house that is quite astounding. Yet we still don't have marriage equality because Speaker William J. Murphy continuously moves to quash any bill that would grant marriage, divorce, burial rights.

So I raised the gauntlet. I did some research, found his law office here in Providence, also found out that a few other state reps and a few shady characters have offices there too.

And his partner, I think his partner is the son of disgraced former Chief Justice Matthew Fay of RI.

In other words, corruption in RI goes back a LONG way.