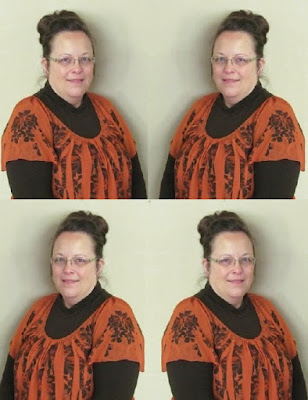 County Clerk Kim Davis made the news because she refused to give a gay couple a marriage license. Although, the right to marry is the law in Kentucky, Kim still refused. She claimed her Christian duty was being violated or some bullsh*t.

Well, she tried to take her crappy excuse to court and they basically rained on her parade. A federal judge ruled that in despite of her religious feelings, she had to issue marriage licenses to same-sex couples. U.S. District Court Judge David Bunning told Kim that she can praise God all day, everyday, but since she took an oath to be a clerk... She has to follow the law.

Yes, Kim was defeated realized that the law is on our side. But that didn't stop this heifer from acting out. Just today, Kim refused to issue a same-sex couple a marriage license. Kim's holding out because she filed an appeal to the judge's decision. I don't know if she understood the judge, but she has to follow the law. I guess she's thinking she doing the Lord's work.

Well, Kim, girl... You keep thinking that as you stand in the unemployment line for your beliefs.

source
Posted by Wonder Man at 8:16 AM

I agree with the Judge!! Since she took an oath to be a clerk and perform it's duties....since she is not, why is she not fired?