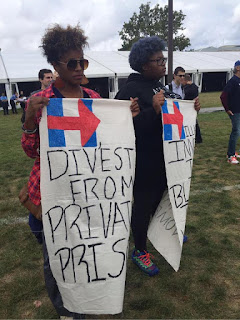 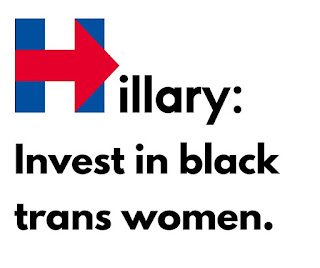 Activists with GetEQUAL and Black Lives Matter disrupted Hillary Clinton’s grassroots campaign event in Cleveland today. They demanded that she divest from private prisons and focus on the safety of Black transgender women.


“Bankrolled by private prison companies and lobbyists like Corrections Corporation of America and the GEO Group, Hillary Clinton is part of the system of violence that criminalizes and kills Black trans people -- how can we take her policy suggestions to curb mass incarceration and detention seriously while she’s accepting this money?” asked Angela Peoples, co-director of grassroots LGBTQ network GetEQUAL and a disruptor of the event.

“Hillary Clinton must stand with Black people, especially Black trans women, by refusing to accept funds from or bundled by executives of or lobbyists for private prison companies -- and investing the money she’s already accepted from those companies in the work toward Black trans liberation,” said Rian Brown, GetEQUAL state lead and local Cleveland organizer taking part in the disruption. “Until that happens, we cannot for a moment think that Hillary believes Black Lives Matter.”

Brown added: “The actions that took place across the country on Tuesday were a call for cisgender Black folks to show up for Black trans people; we’re here to demand that Clinton divest from private prisons in solidarity with our Black trans family.”