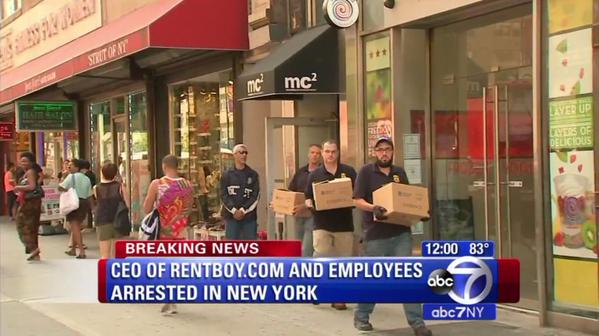 Lord, it's going down today!

Anywho, their offices were raided in NYC this morning. CEO Jeffrey Hurant and six of his workers were arrested.


The company, which billed itself as the world's largest male escort service, is located at a walk-up on West 14th Street, off Fifth Avenue, with no signage. Boxes of documents and computers were also seized.

It was a Homeland Security bust carried out with help from the NYPD.

Authorities said the site operated as a male prostitution ring, cutting out the middle man. The complaint said that Rentboy.com, founded in 1997, hosted thousands of paid advertisements. Despite disclaimers that the ads were not for sexual services, Rentboy.com is designed for advertising illegal prostitution, the complaint said.

Followed by a news clip