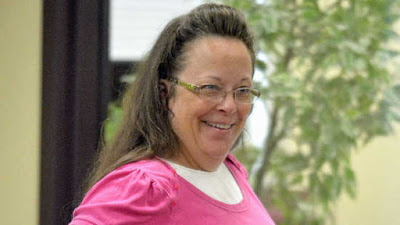 From The Morehead News:

On Thursday the Rowan County Attorney's Office referred a charge against Davis to the Kentucky Attorney General's Office.

Today, County Attorney Cecil Watkins said that the Rowan County government and his office had no other action against Davis.

“No authority exists for her removal or suspension from the office by Rowan County government,” said Watkins. “Kentucky State Government is the only entity that can move to have Kim Davis removed as Rowan County Clerk.”

KRS 522.020 and KRS 522.030 deal with official misconduct in the first and second degree, respectively. “A public servant is guilty of official misconduct in the first degree when, with intent to obtain or confer a benefit or to injure another person or to deprive another person of a benefit, knowingly commits an act relating to his office which constitutes an unauthorized exercise of his official functions or refrains from performing a duty imposed upon him by law or clearly inherent in the nature of his office or violates any statute or lawfully adopted rule or regulation relating to his office,” according to KRS 522.020.

Official misconduct in the first degree is a Class A misdemeanor and is punishable with imprisonment not to exceed 12 months and fines of $500.

Official misconduct in the second degree is a Class B misdemeanor and carries a potential punishment of up to 90 days imprisonment and fines of $250.

The charge must be tried in court before a designation of first or second degree is placed upon it.

“Kentucky Bar Association rules of the Supreme Court of Kentucky prohibit the Rowan County Attorney's Office from prosecuting Kim Davis due to being involved in current litigation with Davis,” said Watkins. “Typically, the Attorney General's Office refers conflict cases to a prosecutor from another county.”

The case will be tried in Rowan County.