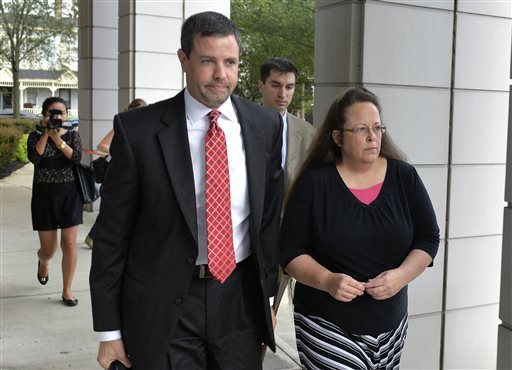 Cootie Queen..... Get it together!

Yesterday, the 6th Circuit U.S. Court of Appeals denied Kim's stay to deny marriage licenses to gay couples. So, she has until Monday to do her f*cking job!

But today, this jackal had the nerve to deny another gay couple their right to marry. She really thinks she can defy the law and God will be her co-pilot in this tired crusade. Seeing that she's running out of options, Kim is appealing her case to... DRUMROLL, to the U.S. Supreme Court Justice Elena Kagan!

Now let me just tell you how this is going to end. Kagan's going to look at Kim's stupid ass and say, "Girl, get out of my face with this mess and get your resume together."

Why do they think Kagan is going to side with them? She was the one who was in favor of marriage equality! Seriously, Kim Davis? Why don't you just accept defeat and go back to the Ozark to raise pigs?

This is getting ridiculous

source
Posted by Wonder Man at 9:48 AM

Yeah, that tired hooker needs to be fired already.