Bernie leading Hillary in the Polls 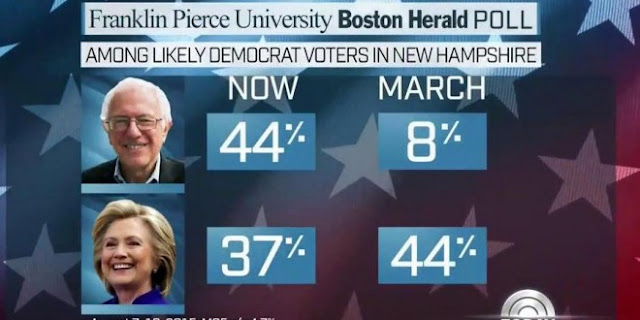 New poll shows Bernie taking the lead against Hillary. The Bernie surges is real and drawing huge crowds to match, but what does that mean for Hillary?


In a Franklin Pierce -Boston Herald poll released late Tuesday night, Sanders leads his Democratic rival with 44 percent to Clinton's 37 percent. Vice President Joe Biden, who has not entered the race, places third, with 9 percent of the vote, and all other Democratic candidates place below 1 percent.

Polls this far out from an election tend to be suspect when it comes to predicting a winner, but the poll, combined with endorsements and on-the-ground energy, reflects a real groundswell for the self-described democratic socialist.

Support for Sanders in New Hampshire has jumped 36 percentage points in five months -- he had just 8 percent in a Franklin Pierce-Boston Herald poll conducted in March.

Although a majority of New Hampshire Democrats see Clinton as the most likely nominee, only 35 percent say they are enthusiastic about her. Fifty-one percent say they could support her, but are not excited about her run.

Comparatively, only 11 percent of likely Democratic voters say they could see Sanders as the eventual nominee. Still, he captures greater enthusiasm among Democrats -- 44 percent say they're excited for Sanders' candidacy, and 36 percent say they "support some of his ideas" but don't think he could win in the general election.

Even worse Clinton is now losing to 4 Republican candidates in Iowa.