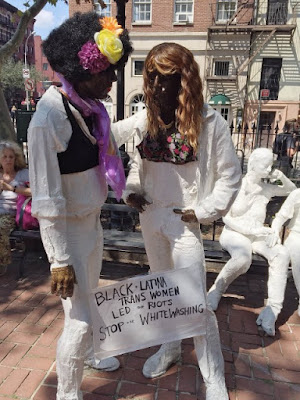 The trailer for the upcoming Stonewall film has angered many of us.

The main reason is the whitewashing of the tale. The movie has this Danny character as the 'White savior' of the story. Activists from all over were pissed, including the survivors of the original riots.

A couple of activists took note and decided to do more than tweet about it. They painted the statues in front Stonewall to represent the POCs involved in the riots.

Autostraddle talked to the activists who painted the statues. This is what they had to say:


Those sculptures are supposedly there to commemorate the Stonewall riots, but there isn’t a trace of the actual riots in them. They’re a slap across the face to the Black and Latina trans women who got whacked with batons and shoved into police vans, and still had the guts to continue to lead the fight for LGBTQ liberation. I mean, the people who modeled for the sculptures weren’t even at the riots! That’s just a straight-up insult. It’s also important to note that the Mildred Andrews Fund paid a (presumably) straight and cis white man $90,000 to depict gay people. It’s no wonder that the sculptures are so impassive and tone-deaf.

We painted them because Marsha P. Johnson, Sylvia Rivera, Miss Major, Storme DeLarverie and all the other Black and Brown people who led the movement deserve credit for their courage and strength. What we did was rectification, not vandalism. Those statues are bronze (brown) underneath the layer of white paint — the symbolism behind that is infuriating. I know that some people are going to be angry, but I’m not concerned with preserving bullshit art. I’m angry about the whitewashing of LGBTQ history.

I love this story!