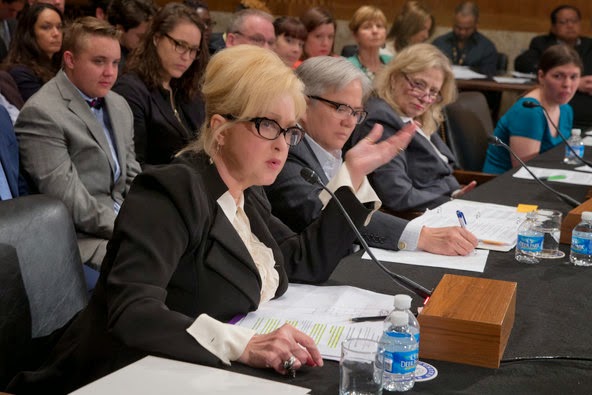 Instead of showing her crotch or kissing the hot new thing on stage, Cyndi Lauper has been putting her stardom to good use. For many years now, Cyndi has been a fierce advocate for LGBT homeless youth.

Yesterday, Cyndi went to Capitol Hill to talk about homeless youth. She also talked with Senator Susan Collins about LGBT youth being turned away from shelters, especially the Trans youth.

Ms. Collins said that could be fixed by requiring shelters that received federal aid to adhere to a nondiscrimination policy, which was a provision in a bill to reauthorize the Runaway and Homeless Youth Act, which expired in 2013. It fell four votes short of the 60-vote threshold for passage as an amendment to a contentious human-trafficking bill.

The problem, Ms. Collins said, was “confusion” over parts of the amendment, including a measure misinterpreted as a restriction on faith-based organizations’ ability to show preference in hiring those of their own faith. Ms. Collins pointed out that the Justice Department already provided that protection. She said she hoped to clarify that when and take another crack at passing the measure she originally introduced.

“Well, when will that be, do you think?” Ms. Lauper asked.

“Then what should we do?” Ms. Lauper said.

Keep pushing, Ms. Collins responded. But she has yet to discuss another effort to reauthorize the legislation, either as a stand-alone bill or an amendment, with Mitch McConnell, Republican of Kentucky.

“He is the majority leader,” Ms. Collins said. “He decides what comes to the floor.”


I applaud Cyndi for doing this. Our youth need a champion and I think she is that person.

source
Posted by Wonder Man at 9:19 AM