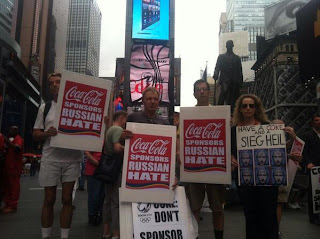 Okay, we have had two boycotts gear towards Russia and their anti-gay law. One, was dumping Stoli vodka and the other was dumping Coke. The coke one is recent. The idea was to force Coca-Cola to not sponsor the Winter Games. However, these boycotts are truly baffling to me because, there are no real impact to them.

When Dan Savage started the #DumpStoli campaign, many gays jumped aboard. I don't know why folks jumped so quick. Maybe because it had Dan's name on it, whatever, folks claimed it was the second coming of boycotts. But as the weeks rolled out, we saw several gay businesses participate... But that was it! It didn't catch on and within a month, the initiative was over. There were posts claiming it worked, but those claims came from folks who wanted to save face and didn't want to admit defeat.

Now, there's a dump Coke protest that didn't amount to much either. So, I have to ask myself and all of you... What is the frakking point?

If we're trying to get attention, fine, you did. But if we are trying to change policy, laws and frame of thinking, dumping liquor and soda pop ain't going to make a difference. Doing something for the sake of doing something don't mean nothing. What needs to done is something that has a long standing and effective impact. These boycotts just makes us look disorganized and true believers of the knee jerk reaction. We are capable of great things, why are we co-signing on these pipe dreams?

I ask for LGBT activists to end these boycotts and really work with Russian activists on something that can change history. These quick fixes and half assed ideas ain't doing anyone any favors.
Posted by Wonder Man at 5:00 AM

I'm all for a good boycott, but these Stoli and Coke ones just seem pointless and ineffective to me.

I never thought the point of the boycotts was the product but was to draw attention to the issue and they have. Athletes painting their nails, thinking twice if a kiss is actually a just a kiss or a protest, drawing the attention to the bigger international sponsors. And just because they're not getting the big headlines, there is real political work being done. The Olympics are HUGE and involve HUGE politics and government. Little can be done quickly and there are many tiny steps to take before we see any real progress or change.

I agree to a point. When it's something that can be controlled within our borders, we can effect change.

But if it's something going on in a foreign country, it's about as effective as protesting an oil company by not buying gas on a certain day of the week.

BTW I had a swig of Cherry Coke this morning. Yum!