Of Course he would: Julian Assange wants a Pardon from trump 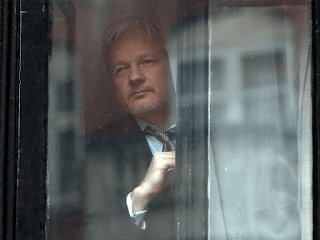 Julian Assange is a tragic queen, a snake and a scoundrel.

And he's asking for help from trump... Like a pardon.


Lawyers for WikiLeaks editor Julian Assange are set to launch an appeal to US President-elect Donald Trump to end criminal investigations over the release of classified documents. Assange, who is currently seeking asylum at the Ecuadorian Embassy in London, is wanted by American authorities after releasing classified documents surrounding the wars in Iraq and Afghanistan provided by former US soldier Bradley Manning.

He is also wanted by Swedish authorities over allegations of sexual assault, and was quizzed by prosecutors inside the embassy last week. Lawyer Jennifer Robinson, who is representing Assange, said that “it is important to remember that he has never been charged and has already been cleared once by the previous prosecutor.”

“Through US counsel, we had reached out to the Obama administration, most recently just a few months ago, and we will continue to do so with future US administrations until the investigation is closed,” she continued.

This let's you know the type of white supremacist and trifle Julian Assange is because he only wants to protect himself from criminal conviction. I hope Anonymous destroys him...