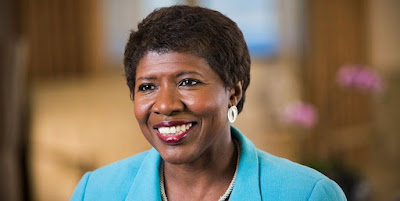 She lost her battle with cancer.


"I am very sad to tell you that our dear friend and beloved colleague Gwen Ifill passed away today in hospice care in Washington," WETA president and CEO Sharon percy Rockefeller wrote in an email to staff at the public TV station Monday. "I spent an hour with her this morning and she was resting comfortably, surrounded by loving family and friends... Earlier today, I conveyed to Gwen the devoted love and affection of all of us at WETA/NewsHour. Let us hold Gwen and her family even closer now in our hearts and prayers."

Ifill had been absent from PBS’s election coverage last week due to ongoing health issues. She also took a leave of absence from the public broadcaster in May to get medical treatment.

"Gwen was a standard bearer for courage, fairness and integrity in an industry going through seismic change. She was a mentor to so many across the industry and her professionalism was respected across the political spectrum. She was a journalist's journalist and set an example for all around her," said PBS NewsHour executive producer Sara Just, in a statement. "So many people in the audience felt that they knew and adored her. She had a tremendous combination of warmth and authority. She was stopped on the street routinely by people who just wanted to give her a hug and considered her a friend after years of seeing her on TV. We will forever miss her terribly."

Ifill was set to receive the 2016 John Chancellor Award from Columbia University this Wednesday.

She will be missed.