President Obama has to Help trump get it Together 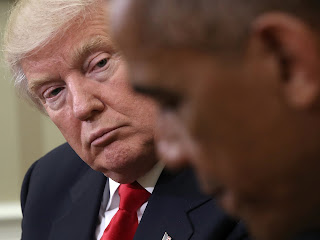 So during trump's meeting at the White House, it was clear that he ain't for this job. Reports are claiming that Laudy Daudy was shocked about the scope of the president's responsibilities.

According to a report from The Wall Street Journal:


Trump's aides were also apparently unaware that the entire staff of the president working in the White House's West Wing would need to be replaced, according to the Journal.

Obama reportedly will spend more time counseling Trump about the presidency than most presidents do with their successors.

Trump and Obama were highly critical of each other during the campaign season, but appear to have struck a conciliatory tone since Trump's election, at least publicly.

"I want to emphasize to you, Mr. President-elect, that we now are going to want to do everything we can to help you succeed, because if you succeed then the country succeeds," Obama said to Trump in front of reporters on Thursday. Trump called Obama "a very good man" during the session.

Looks, like he needs Obama more that Obama needs him.
Posted by Wonder Man at 8:00 AM