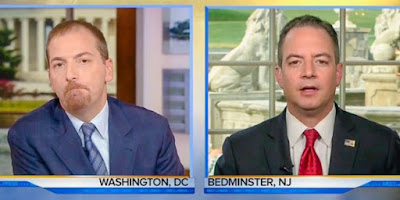 “Look I’m not going to rule out anything. We’re not going to have a registry based on a religion. But what I think what we’re trying to do is say that there are some people, certainly not all people… there are some people that are radicalized. And there are some people that have to be prevented from coming into this country. And Donald Trump’s position, President Trump’s position is consistent with bills in the House and the Senate that say the following: If you want to come from a place or an area around the world that harbors and trains terrorists, we have to temporarily suspend that operation until a better vetting system is put in place.”


He said this on Meet The Press
Posted by Wonder Man at 5:00 AM