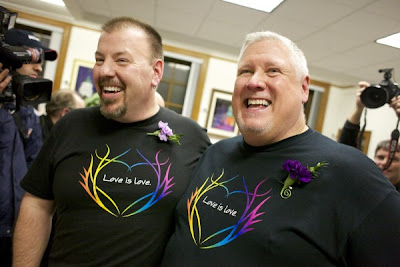 Steven Bridges and Michael Snell are the first couple to get married at Portland City Hall in Maine.


“We finally feel equal and happy to live in Maine,” said Steven Bridges, who married Michael Snell less than a half-hour after same sex marriages became legal in the state.

By 2 a.m. Saturday, the line had emptied out after a total of 15 gay and lesbian couples had acquired marriage licenses in Portland, with six of those couples exchanging vows on the spot. Another couple was married on the city hall’s front steps and then went back inside to return their license.

The hand-holding grooms sported purple carnation corsages, matching T-shirts printed with the phrase “love is love,” and grins so big they hardly seemed to fit on their faces.