New Poll: 53% Americans say the Republican Party is Too Extreme 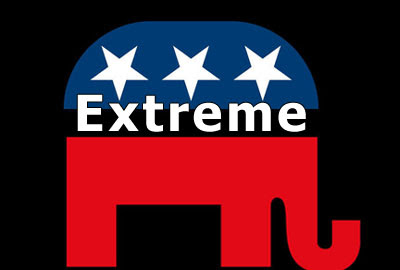 This is very interesting. A CNN poll states that most Americans think the GOP is crazy too extreme. This also includes 22% of Republicans as well. This belief has increased over the years.


According to the survey, 53% say the GOP should compromise more, with 41% saying the Democratic Party should give up more of the proposals it supports to develop bipartisan solutions.

"That's due in part to the fact that the Republican brand is not doing all that well," says CNN Polling Director Keating Holland.

It probably doesn't help that House Speaker John Boehner, who's leading GOP fiscal cliff negotiations with the president, is held in fairly low regard, particularly in comparison to Obama. According to the poll, 34% of the public approves of how the top Republican in the House handling his job. By contrast, the president's approval rating stands at 52%.
"Small wonder that nearly half say they have more confidence in President Obama than in the congressional Republicans and that nearly half (48%) would blame the GOP if the fiscal cliff occurs," adds Holland.