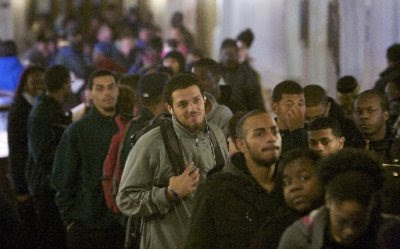 In the presidential election, more minorities came out to vote. The latest Pew Research poll, revealed that more Blacks voted this year, followed by a high number of Asians and Latinos.


African-Americans made up 12% of the eligible electorate this year, yet they accounted for 13% of total votes cast. This is the second presidential election in a row in which black voters “over-performed” (they did so in 2008 by the same proportion).

Whites’ turnout rate—votes cast as a share of eligible voters—declined in both 2012 and 2008, though whites’ share of the eligible electorate is also shrinking.

Whereas other minority groups have seen increased electoral clout largely because of population growth, blacks’ growing share of the vote in recent presidential elections is due to mounting turnout rates.

More Hispanics and Asian-Americans voted in 2012 than ever before, but their turnout rates continue to lag behind that of the general public.

So no matter much the GOP tried to suppressed the vote, their plans were easily spoiled.

I think this year we saw more clearly how the Republicans really want to steal elections.

I do not trust electronic voting machines by which I'm speaking of the touch screen versions. They can be easily tampered with.

In RI we use mark-sense system. You complete a line to indicate your vote on the ballot and then feed it to a scanner which:

1) Registers the votes on both a printer paper record and on a digital memory module.

2) All ballots are retained withing the machine.

We had some problems in some districts this time around with machines that were filling up too quickly but I know you can put large hoppers on these machines so I think the Board of Elections has some upgrades to think about.