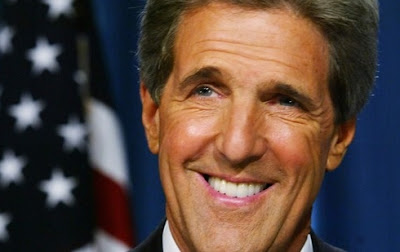 
"John's entire life has prepared him for this role," Mr. Obama said in announcing his decision in the Roosevelt Room at the White House Friday afternoon. He was joined by Vice President Joe Biden, Kerry, and Kerry's wife Teresa Heinz Kerry.

Clinton, who is recovering from a concussion and suffering from a flu, was not present. Mr. Obama said she "very much wanted to be here today, but she continues to recuperate."

Kerry is expected to be confirmed with relative ease in the Senate. The 69-year-old senator is chairman of the Senate Foreign Relations Committee and is widely respected in Democratic foreign policy circles. A Vietnam veteran who spoke out against the war upon his return, Kerry was hailed by the president for having "played a central role in every major foreign policy debate" for nearly three decades.

"He is not going to need a lot of on the job training," Mr. Obama said, pointing to Kerry's many connections to world leaders. He called the Massachusetts senator who tapped him to give the keynote speech at the 2004 Democratic National Convention a "great friend" and reference Kerry's role in playing Mitt Romney in presidential debate prep sessions earlier this year.

Still wished that Rice stayed in the game though.

I have nothing against Kerry but he reminds me of Herman Monster. I like Herman.