New Study: Majority of Blacks thinks Being Gay is a Choice 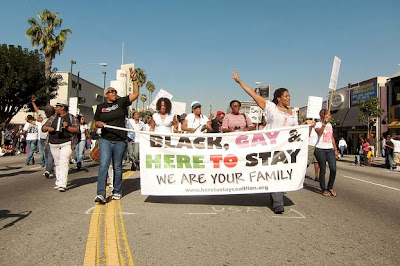 In the report, called “Public Opinion and Discourse on the Intersection of LGBT Issues and Race,” we learn some more sad mess.

According to them, a majority of Black folks think being gay is a choice.
From Atlanta BlackStar:

Demonstrating the influence of religion on this issue, people who go to church weekly are far less likely to be pro-LGBT—24 percent of weekly church-goers support marriage equality compared with 57 percent of people who rarely or never attend worship services.

Somebody has to be out and about in the Black community, telling the truth. And the first truth to tell is this: Being Gay is not a Choice.
Posted by Wonder Man at 4:00 AM

Email ThisBlogThis!Share to TwitterShare to FacebookShare to Pinterest
Labels: Public Opinion and Discourse on the Intersection of LGBT Issues and Race, study

If that be true so is being straight.
My dick has never been in a vagina, I did come out of a vagina.

*sigh* The simpleton mess that some members of folk perpetuate is downright aggravating. This is one of the reasons why so many black males that are gay or bisexual are hiding