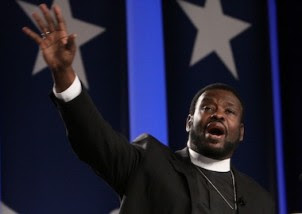 
In a breakout session at the Values Voter Summit this past weekend, Jackson fleshed out the campaign, which is working to turn minority voters against Obama and Democratic candidates in seven swing states. He’s already had several events, but he’s still scrounging for cash to fund the full effort.

“I think that we’re going to win this battle for marriage and I believe that we’re going to win this fight even for the presidency,” Jackson said, “but I believe it’s going to be the last two minutes of the game, in the fourth quarter and it’s going to be what you would call a ‘Hail Mary pass.’” At the end of the workshop he made his goal clear: “I’m asking God to give us a victory at the congress and senatorial levels so we have a firewall. I’m also asking him to give us deliverance from the president that’s in the White House today for four years.”

Jackson’s workshop was billed as the “Vertical Vote Campaign for Life, Marriage and Religious Liberties.” The “vertical” title echoes language used by Jackson ally Samuel Rodriguez, who insists that evangelicals have to vote their vertical (God-oriented) values.

So Harry is using his NOM/Hate/Blood money to deceive Black voters. Folks need to take heed to this liar and bootlegger. It's a shame how easy this fool can be bought and sold.

Harry, you are truly a disgrace and truly charlatan.

He is just stealing the donations.