The Trump supporters are getting waaay out of line! Look at this 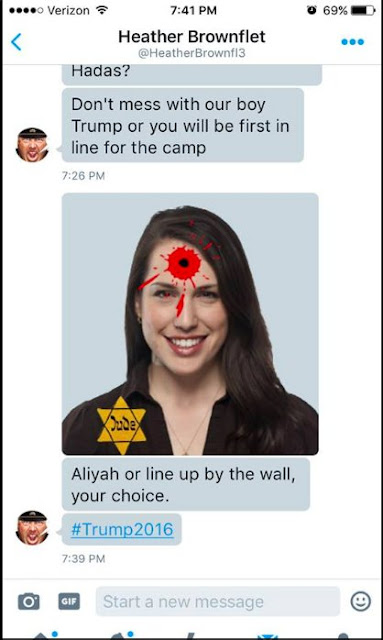 
According to BuzzFeed, the threat was reported and the account was suspended.

"Politico notified Twitter of the threatening and vile tweets, and Twitter acted promptly to suspend the account. There were many more tweets and emails, some even more vile if that is imaginable. A police report is in the process of being filed," a spokesperson for Politico told BuzzFeed.

The threat to Gold is, unfortunately, not unusual. Supporters of Trump, white supremacists and the alt-right have used Twitter, Reddit and 4chan to harass and coordinate virtual attacks on journalists, Jews and people of color using a series of memes and coded language.

These people are dangerous... Dumb, but dangerous

source
Posted by Wonder Man at 8:52 AM