As most of you know, I attended Netroots Nation in Phoenix, Arizona. On Saturday, there was a town hall meeting that involved presidential candidates, Martin O'Malley and Bernie Sanders. 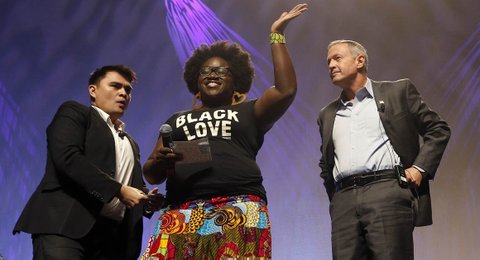 During the event, the Black Lives Matter movement stage a protest. O'Malley try to address the issue, but in the middle of his answer he said White Lives Matter which upset the crowd. After he left, Bernie Sanders came out to the stage, now when he appeared I assumed he would be ready to address the issue. I mean, this was his chance to put to rest the notion that he's unaware of the issues of the communities of color.

However, when he appeared on stage, he seemed agitated and not prepared to address the issue. Yes, there was a lot going on at that moment, but Bernie had plenty of time to change his speech to fit the subject. Instead of doing that, he stuck to his talking points which did not win over the BLM crowd. Bernie failed to address the matter appropriately, thus making the group pissed and unsatisfied. As the day went on we noticed something very interesting, the Bernie Sanders supporters seem to be highly upset with us. They were calling us divisive, hateful and vile. In fact, the Bernie supporters, tried to tell the Black attendees how to be 'polite' and how we should act. Sorry folks, we don't need your instructions.

What we did was exactly what Netroots is all about. We were shouting because we are tired of being silent. We are tired of dying. We have lost too many lives due the police. We have seen how they lie and murder us without a second thought. We had to speak out because if we didn't, would anyone care?

Since the event, the story has spread like wildfire. If you're my FB friend, you can watch the videos. I'm proud to have participated in that moment. I'm proud to speak out for my fellow brother and sisters, and I'm proud that we made these so-called liberals uncomfortable.

If Bernie or Martin can't handle us, what do you think the GOP will do?
Posted by Wonder Man at 5:00 AM

If O'Malley and Sanders are unsatisfactory to the Black Lives Matter movement then no one will be. Our political system is not remotely perfect but if the BLM movement can't find a way to work within that system then how can they ever expect to create any kind of change?