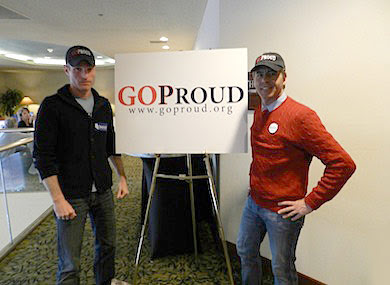 GOProud must be living on Earth 2, because this press release is not realistic. For some odd ass reason, they believe ANY of the busted GOP presidential candidates would be better than President Obama.


“After last night’s Republican debate one thing is clear: any one of the four remaining GOP Presidential candidates would be a dramatic improvement over the failed Presidency of Barack Obama. All Americans, gay and straight, are living in the disastrous Obama economy.

“In his State of the Union address this week, Obama had the chance to admit his failures and chart a new way forward for his administration. Sadly and predictably, instead of taking responsibility he chose to double down on his failed policies and fan the flames of class warfare.

“The truth is that most Americans, gay or straight, are not better off than they were in 2008.
“Each of the four remaining Republican Presidential candidates has put forward a vision for America that embraces, rather than demonizes, free enterprise. On the bread and butter issues that face gay and straight families – from healthcare to taxes to retirement security and personal freedom – all four of these candidates are head and shoulders above Barack Obama.

“Organizationally GOProud has not yet endorsed a candidate and each of the remaining candidates has supporters among our membership and leadership team.

“While we may not yet be united behind one candidate, we are united in one common purpose: to defeat Barack Obama.

“Make no mistake about it, when this primary process is over the conservative movement will unite behind the nominee. We look forward to being a part of the unified effort to make Barack Obama a one term President.”

Email ThisBlogThis!Share to TwitterShare to FacebookShare to Pinterest
Labels: GOProud

Make no mistake about it, gay or straight, greed and bigotry will always trump common sense and wisdom. Any "failed" policies Obama may have, have failed because of GOP obstruction and all the flame fanning they did to promote race warfare with the white upper class rich, and white lower/middle class bigots. Greed and bigotry will get you every time. I'll bet those two little white boys would be singing a different tune if the President were a white man. The comment about embracing free enterprise and the unregulated greed that caused our economic meltdown gives their true nature away.
Idiots like these are to be ignored, gay or straight! And beleive me, if one of those four @$$holes gets into office, they'll be the ones losing rights, but they won't care, because they want to be better than others, not necessarily equal.

I'm always endlessly amused by people who will tilt their political compass at a group who would deny them the rights they currently have.

I believe it is a high form of delusion!

Why do these people even get any news coverage?

Some people's brains aren't wired right. That' s the only explanation I can offer for these two.

I like knowing that not all gays think the same way. I sometimes try and tell myself it's not a race thing but that thought is fading fast.