My thoughts on GetEQUAL's protest 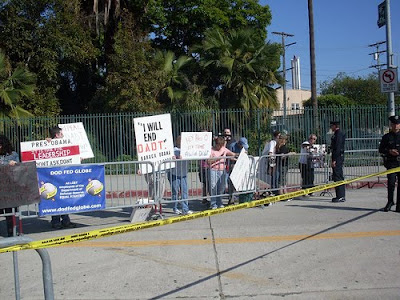 So after I thought about it, I realized the GetEQUAL protest may have done more harm than good yesterday.

I'll explain bullet point style:
I urge GetEQUAL to rethink their protest strategy. This protest didn't really move them in a strong place. They were dismissed as teabaggers.

I also encourage GetEQUAL to work with others and actually plan stuff out. This broke version of protesting is, well, broke. Get it together and try again.

V, I agree with you 100% on this. People need to follow appropriate modes of decorum and really think strategies through. As you stated this was very poorly planned and probably resulted in publicity which doesn't work to our favor. We don't need that.