Don't feel Bad Gays, White Guys were left out of Obama's message too 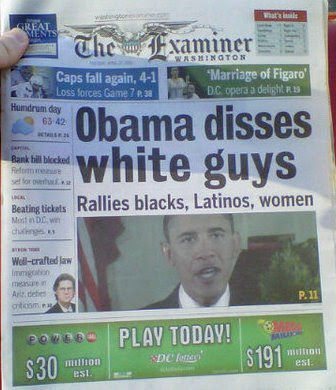 Folks are full of jokes these days... Washington Examiner wrote an article, claiming Obama left out white men in his 'rally the voters' video ad.

In a video message emailed to more than 13 million supporters, Obama said Democrats need a 2008 repeat.

Conservatives said the move was racially divisive -- asking rhetorically what would happen if a president called for unity among white voters to win an election. But the strategy reflects political reality. Polls show Obama's support among white males has dropped off -- in large part over economic issues and his health-care plan.

"I think a lot of white men, a few Republicans but mostly independents, are the people leaving Obama in droves," said Aubrey Jewett, a political scientist at the University of Central Florida. "Realistically the Democrats don't think they have a chance of getting them back between now and November."

Now, I understand why John Aravosis why upset... He was left out twice!

source
Posted by Wonder Man at 6:54 AM

Yes, we all know how difficult it is being a white heterosexual male in America.

They can play it any way they want to, but he and his advisers are just appealing to the people they need to for the election.