Hey God, there's a Million Folks praying for Obama's death... How do you feel about that? 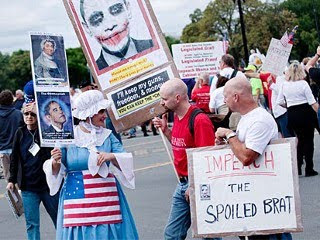 This is a hot ass mess.

A Facebook group accused of "praying" for the death of President Barack Obama has raised controversy online, with many calling for Facebook to remove the group as "offensive speech."

The group, which lists its location as "Marysville, OH, 43040," currently has over 1 million members--Facebook users who say they "like" the group. It includes an album of anti-Obama imagery uploaded by the group's members--what Facebook labels "fan photos--that show the president against a communist flag, juxtaposed with insulting and derisive captions, or even a cartoon "associating Obama to Hitler."

There's another page asking Facebook to remove the 'prayer', they have over 650, 000 followers. If you ask me, the whole thing is a mess. I expect this behavior in Myspace, not Facebook.

I wish some religous types would step up and call it out for what it is; evil. If they won't defend their own bread & butter (religion) and keep allowing shit sully their name (like Catholic Priest), then they are worthless. They are proving, by actions, that they stand for nothing!

I wonder what would happen if the President was white and all of the teabaggers were black.
The teabag party would have been kaput along time ago.

wouldn't this be a matter for NSA, as it's bound to trigger some lunatic nutjob...
:(~