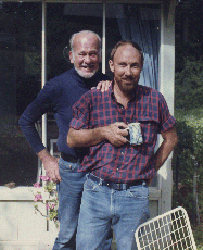 This is a very sad story about an older gay couple in California:

Clay and his partner of 20 years, Harold, lived in California. Clay and Harold made diligent efforts to protect their legal rights, and had their legal paperwork in place--wills, powers of attorney, and medical directives, all naming each other.

Harold was 88 years old and in frail medical condition, but still living at home with Clay, 77, who was in good health. One evening, Harold fell down the front steps of their home and was taken to the hospital. Based on their medical directives alone, Clay should have been consulted in Harold's care from the first moment. But they wouldn't let Clay see Harold.

Then, the county then ultimately went one step further by isolating the couple from each other, placing the men in separate nursing homes. Ignoring Clay's significant role in Harold's life, the county continued to treat Harold like he had no family and went to court seeking the power to make financial decisions on his behalf.

Outrageously, the county represented to the judge that Clay was merely Harold's "roommate." The court denied their efforts, but did grant the county limited access to one of Harold's bank accounts to pay for his care.

Without authority, without determining the value of Clay and Harold's possessions accumulated over the course of their 20 years together or making any effort to determine which items belonged to whom, the county took everything Harold and Clay owned and auctioned off all of their belongings. Adding further insult to grave injury, the county removed Clay from his home and confined him to a nursing home against his will. The county workers then terminated Clay and Harold's lease and surrendered the home they had shared for many years to the landlord.

Three months after he was hospitalized, Harold died in the nursing home. Because of the county's actions, Clay missed the final months he should have had with his partner of 20 years. Compounding this tragedy, Clay has literally nothing left of the home he had shared with Harold or the life he was living up until the day that Harold fell, because he has been unable to recover any of his property. The only memento Clay has is a photo album that Harold painstakingly put together for Clay during the last three months of his life.

But here's the silver lining:

With the help of a dedicated and persistent court-appointed attorney, Anne Dennis of Santa Rosa, Clay was finally released from the nursing home. Ms. Dennis, along with Stephen O'Neill and Margaret Flynn of Tarkington, O'Neill, Barrack & Chong, now represent Clay in a lawsuit against the county, the auction company, and the nursing home, with technical assistance from NCLR. A trial date has been set for July 16, 2010 in the Superior Court for the County of Sonoma.

This story is very real and has been happening to us for too many years. What President Obama did this past week, brings some hope that stuff like this will soon end.

My heart goes out to Clay and I wish him luck in this lawsuit. No one should ever experience anything like this.

Stay strong, Clay. The community has your back.

Tragic, sad, and far too invasive a story. One that has been heard before. My thoughts and heart are with Clay. I hope he is able to prove his story in court and make they learn.

This is a pretty depressing but not at all surprising story. I'm glad a lot of folks are taking notice of it, and I am surprised by the general "that's a stupid thing to do" response coming from non-lgbt folk.

It shows that progress is being made.

If you want to do something, send letters to the local Sonoma County paper, the Press Democrat (owned by NY Times). The PD has ignored the story (apparently for months) letters@pressdemocrat.com.