Derrick Martin had a good night at the Prom 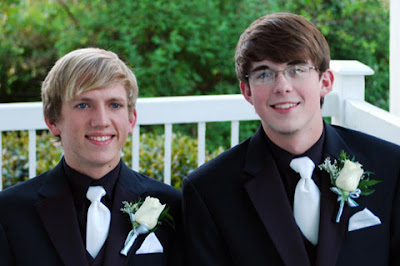 Great news for Derrick Martin! After being kicked out of his home and heckled from his school, he actually had a great time at the prom.

When Martin, 18, and his boyfriend Richard Goodman, also 18, stepped onto a makeshift “red carpet” and their names were announced, a few parents whispered but many in the crowd gave him a loud cheer. No one yelled out in protest.

“I wonder if they realize what they’ve done,” said Arturro Beeche, a San Francisco professor who flew into Georgia on Friday and drove Martin and Goodman to the prom. “Once it happens in small-town America, it will inspire so many,” he said.

I'm glad this was a night to remember for Derrick Martin.
source

a wink at Towleroad for the pic.
Posted by Wonder Man at 3:02 PM

I do think it will inspire many! We don't know the true impact yet but i really feel like these steps are going to tear down many a wall.

And what a cute couple they make.

I hope the gathered lots of terrific memories. This will mean so much to so many people.

That is so incredibly awesome! This makes me feel so happy about life!