Do you want to see DAZZLER the Movie? 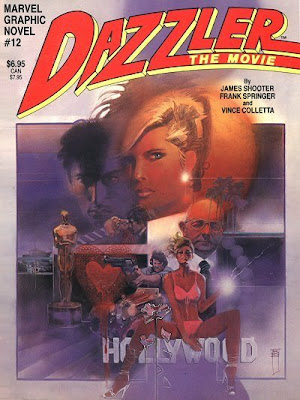 Marvel is thinking about unleashing the B/C list characters in films.

Marvel Studios is currently taking meetings with writers and directors to work on small scale movies based on some of their third tier characters. The movies would cost in the range of 20 to 40 million dollars (very small when we're talking studio films) and would allow them to take risks with less obvious characters and with interesting talent.

Filmmakers are being offered their pick of characters whose names are only familiar to comic fans. Properties like Dr. Strange, Ka-Zar, Luke Cage, Dazzler and Power Pack are among the many that are being tossed around right now. And the attitude seems to be that Marvel is open to bringing any of their characters to the screen at the right price point.

In a lot of ways this is revolutionary. While superhero movies such as Kick-Ass have been made at a lower price point, the big studio system seems unable to keep costs down (Marvel has been just as guilty of this, by the way. Their films were supposed to be cheaper originally).

Well, this could interesting, but really? Some of these characters don't need a movie.
Impossible Man? Mimic? Nova? Bova?
No, not ready for those folks.

source
Posted by Wonder Man at 2:17 AM

FAR more interesting B & C characters in the Marvel universe.

I have ALWAYS loved Allison Blaire.
She is primed for a movie...
She's a mutant and a pop superstar! With the right story telling this could be GREAT!

Well, I'd be interested in most of those. As long as the writing was really good. But in all honesty, I'm sure the writing would be terrible b/c Hollywood writers don't really respect the genre of super hero. Even with all the examples of 300, Kick Ass, Sin City, and Watchmen... they will still put some hack on writing chores to dole out more Dare Devil, Elektra, Blade, etc.