Following the Crowd: 35 Things about Me 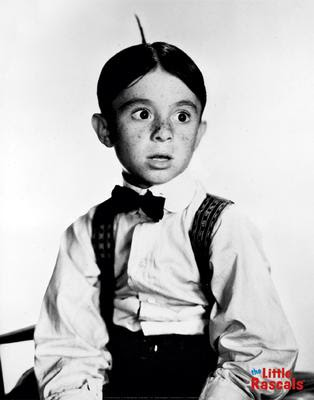 1. I had a crush on Alfalfa (from the Little Rascals) as a child.
2. I read tons of witchcraft books in grade school and freaked out the
school's librarian.
3. The 1st movie I ever saw in the theater was King Kong.
4. The 1st rated R movie I saw in the theater was Friday the 13th part 4.
5. I kissed my 1st guy in a empty dog house at 8.
6. I was caught cheating on a spelling test by looking at the crayons to spell the
colors, my grandmama told the teacher that I was smart to doing that.
7. I was teased for liking Wonder Woman and She-ra, but I didn't care. I was richer
than the teasers.
8. I had to play all the girl characters in G.I. Joe.
9. I used to steal cassette singles from K-Mart.
10. I received unemployment checks at 17.
11. I wrote, drew and created my own comic book for 20 years.
12. My 1st liquid dream involved Rick Springfield.
13. I had a family of Sea Monkeys.
14. I stop praying at 16.
15. I used extra student loan money for Spring Breaks.
16. I used to think that white men were killers as a kid.
17. Although I was with the popular crowd in high school, I was very unhappy
(sexuality issues).
18. I never had pets until now.
19. I wanted to be a fashion designer.
20. I almost joined the army.
21. My 1st comic book was Wonder Woman 251 from the 1st series.
22. I used to catch bees in jars.
23. I thought I was special because I liked boys as a kid.
24. I was jealous of my female friends in high school, because they could have any
guy they wanted.
25. I wanted to be a runaway.
26. When I had a girlfriend, she thought she was pregnant because her period was
late. But she wasn't, it was stress. 3 months later, we broke up.
27. I was in the high school band. I played the clarinet.
28. I always liked bigger guys. Just seem more masculine.
29. I've had 3 boyfriends, but only been in love once (Jamie).
30. I don't cuss.
31. I have nothing pierced and I have no tattoos.
32. I stopped a guy from giving multiple blow jobs at a dark room in a bar. My
student affairs training kicked in.
33. I waited for the right guy to have sex, but he turned out to be a loser.
34. I may change careers.
35. I can be a hater sometimes.
Posted by Wonder Man at 7:58 AM

I don't dare post a 25 things on my blog because I'd probably scare the shit out of people if I did.

Beside the point, if you've been reading the blog you pretty much know those 25 things already.

Like the time I found out how easy it is to manipulate the media. Yeah, that was just too easy.

The story behind that has gotten me quite a bit of scorn from other gay people but I did what had to be done at the time.

Lets just say my moral compass is broken and has been replaced with a high tech GPS system. I don't see morality as black/white, I see it is varying shades of gray.

I played the clarinet as a child.

Is this another blog fad thingy's?

Oh no you better not girlfriend.

I was glued to my seat while reading your list, but I think the thing that shocked me the most was how you don't cuss!

You're a brave man....I was struck by some of the similarities in you list to what mine would be if I ever decided to do such a thing....lol