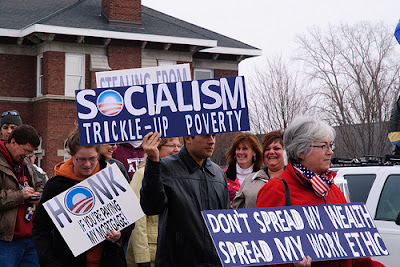 I'm feeling this info. New reports are showing the growing negative views about the Tea Party in this country.


Rasmussen Reports periodically asks Likely U.S. Voters to rate political labels, and the latest national telephone survey finds that 38% consider it a positive when a political candidate is described as “conservative.” That’s consistent with surveys for several years but down slightly from 42% in January. Twenty-seven percent (27%) see conservative as a negative political label, up six points from the prior survey. Thirty percent (30%) rate it somewhere in between.

“Tea Party” has suffered much worse. Considered a positive political label by 29%, 43% now think Tea Party is a negative description for a candidate. That’s a net rating of negative 14, making it the worst thing you can call a candidate. Twenty-three percent (23%) put it somewhere in between.
Last September, 32% viewed Tea Party as a positive label and 38% a negative one. That was the previous low point for the grassroots smaller government movement. But that negative finding fell to 32% in January.

I bet you that the GOP candidates will start moving away from this title as the main campaign goes forward... Watch.
Posted by Wonder Man at 10:41 AM

I guess you can't fuck with America's pocket book.lol