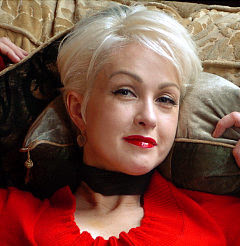 
The True Colors Residence, named after her 1986 hit "True Colors," will be located on West 154th St. near Frederick Douglass Blvd. in Harlem. The residence, the first permanent housing facility of its kind in the city, was conceived by the singer, her manager and the West End Intergenerational Residence, a non-profit focused on providing housing for homeless families and the elderly.

Lauper, a longtime supporter for LGBT rights, was moved to pursue this project because up to 40 percent of homeless youth in the city identify as LGBT. "These young people often face discrimination and at times physical assault in some of the very places they have to go for help," she wrote in a letter seeking donations for the residence. "This is shocking and inexcusable!"

The opening day is September the 1st. Go Cyndi!

source
Posted by Wonder Man at 9:33 AM

I don't jump on every 'awareness' campaign that comes along ...

... But this is a very serious issue in our society.