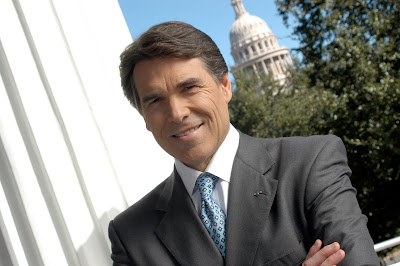 This freaks me out a little when I read this. Please take a look:


1. Abolish lifetime tenure for federal judges by amending Article III, Section I of the Constitution.

Perry makes it no secret that he believes the judges on the bench over the past century have acted beyond their constitutional bounds. The problem, Perry reasons, is that members of the judiciary are "unaccountable" to the people, and their lifetime tenure gives them free license to act however they want. In his book, the governor speaks highly of plans to limit their tenure and offers proposals about how to accomplish it.
"'[W]e should take steps to restrict the unlimited power of the courts to rule over us with no accountability," he writes in Fed Up! "There are a number of ideas about how to do this . . . . One such reform would be to institute term limits on what are now lifetime appointments for federal judges, particularly those on the Supreme Court or the circuit courts, which have so much power. One proposal, for example, would have judges roll off every two years based on seniority."

2. Congress should have the power to override Supreme Court decisions with a two-thirds vote.

Ending lifetime tenure for federal justices isn't the only way Perry has proposed suppressing the power of the courts. His book excoriates at length what he sees as overreach from the judicial branch. (The title of Chapter Six is "Nine Unelected Judges Tell Us How to Live.") Giving Congress the ability to veto their decisions would be another way to take the Court down a notch, Perry says.

3. Scrap the federal income tax by repealing the Sixteenth Amendment.

The Sixteenth Amendment gives Congress the "power to lay and collect taxes on incomes, from whatever source derived, without apportionment among the several States, and without regard to any census or enumeration." It should be abolished immediately, Perry says.

Calling the Sixteenth Amendment "the great milestone on the road to serfdom," Perry's writes that it provides a virtually blank check to the federal government to use for projects with little or no consultation from the states.

4. End the direct election of senators by repealing the Seventeenth Amendment.

Ratified during the Progressive Era in 1913 , the same year as the Sixteenth Amendment, the Seventeenth Amendment gives citizens the ability to elect senators on their own. Perry writes that supporters of the amendment at the time were "mistakenly" propelled by "a fit of populist rage."

"The American people mistakenly empowered the federal government during a fit of populist rage in the early twentieth century by giving it an unlimited source of income (the Sixteenth Amendment) and by changing the way senators are elected (the Seventeenth Amendment)," he writes.

5. Require the federal government to balance its budget every year.

Of all his proposed ideas, Perry calls this one "the most important," and of all the plans, a balanced budget amendment likely has the best chance of passage.
"The most important thing we could do is amend the Constitution--now--to restrict federal spending," Perry writes in his book. "There are generally thought to be two options: the traditional 'balanced budget amendment' or a straightforward 'spending limit amendment,' either of which would be a significant improvement. I prefer the latter . . . . Let's use the people's document--the Constitution--to put an actual spending limit in place to control the beast in Washington."

6. The federal Constitution should define marriage as between one man and one woman in all 50 states.

Despite saying last month that he was "fine with" states like New York allowing gay marriage, Perry has now said he supports a constitutional amendment that would permanently ban gay marriage throughout the country and overturn any state laws that define marriage beyond a relationship between one man and one woman.
"I do respect a state's right to have a different opinion and take a different tack if you will, California did that," Perry told the Christian Broadcasting Network in August. "I respect that right, but our founding fathers also said, 'Listen, if you all in the future think things are so important that you need to change the Constitution here's the way you do it'.

7. Abortion should be made illegal throughout the country.

Like the gay marriage issue, Perry at one time believed that abortion policy should be left to the states, as was the case before the 1973 Supreme Court case Roe v. Wade. But in the same Christian Broadcasting Network interview, Perry said that he would support a federal amendment outlawing abortion because it was "so important...to the soul of this country and to the traditional values [of] our founding fathers."

Nope, this man can't be President.

source
Posted by Wonder Man at 9:00 AM

F*ck him. If he wins the GOP nomination, that alone would make me vote for Obama.