One More for Bishop Eddie Long 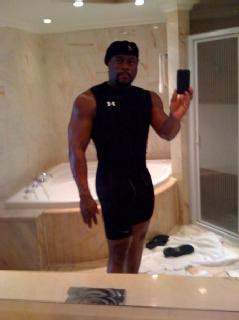 This is a pic he allegedly sent to Jamal Parris

Lord, this is becoming a Tyler Perry movie.

Another man has come out about Bishop Eddie Long and how he manipulated him sexually.

According to the lawsuit filed today in DeKalb County, Long welcomed Jamal Parris, who was 14 years old at the time, into his circle of "Spiritual Sons." Long allegedly lavished gifts on the small, intimate group of young male parishioners who'd entered into a "covenant" with the pastor. Much like the other lawsuits, Long is accused of using his spiritual position and scripture to defend the alleged sexual encounters.

The relationship turned sexual after 2004, the lawsuit claims, when Parris, who by then was 17 and had started working at New Birth as Long's personal assistant, accompanied the pastor on trips across the country in the church's private plane and made private visits to his DeKalb County guesthouse and living area at the megachurch.

According to the suit, in 2009, Parris — whom Long allegedly encouraged to call him "Daddy" — started a relationship with a girlfriend, distanced himself from the pastor, and ultimately left the church.

This church as a private plane? People stop paying for this man's lust for power and wealth! No wonder he's corrupted.

AHHHH WHAT A CREEPY ASS CREEP PICTURE! THAT IS WHAT THEY DO!

AHHH GOSH IF THIS COMES OUT AS NOT TRUE...THEN DAMN...HE HAS A STRANGE WAY OF GUIDING THESE YOUNG MEN! HE MAY NEED TO RETHINK THIS "MENTORING" HE SO CALLED DOES.

UGH, WHAT A MESS!

i think it's pretty obvious that he did it. The money trail proves it. He bought a guy a Mustang, and a house. And put him on the church payroll.
All for the price of silence and cooperation.