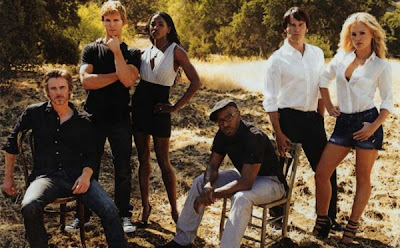 Well this something. True Blood could go the route of Sex and the City (hopefully better than SATC 2)

From Ace Showbiz, here's the stuff:

Words on the street are, HBO is planning to turn the hit TV series, which stars Stephen Moyer and Anna Paquin, onto the big screen.

What's Playing, via Cinema Blend, speculates that the "True Blood" movie will be made after airs one or two other season(s) of the show, which has just wrapped the third season. Moreover, the site says there is a chance that series creator and showrunner Alan Ball will direct the film.

If the news is indeed true, "True Blood" will not become the first HBO's show which is adapted into movie. Previously, "Sex and the City" which was aired by the same network has been made into film franchise with the second installment just hitting theaters last summer.

This could be fun, what do you think?
Posted by Wonder Man at 5:40 AM

V, I think it could work.